Meditation and Consciousness – and where we get stuck! 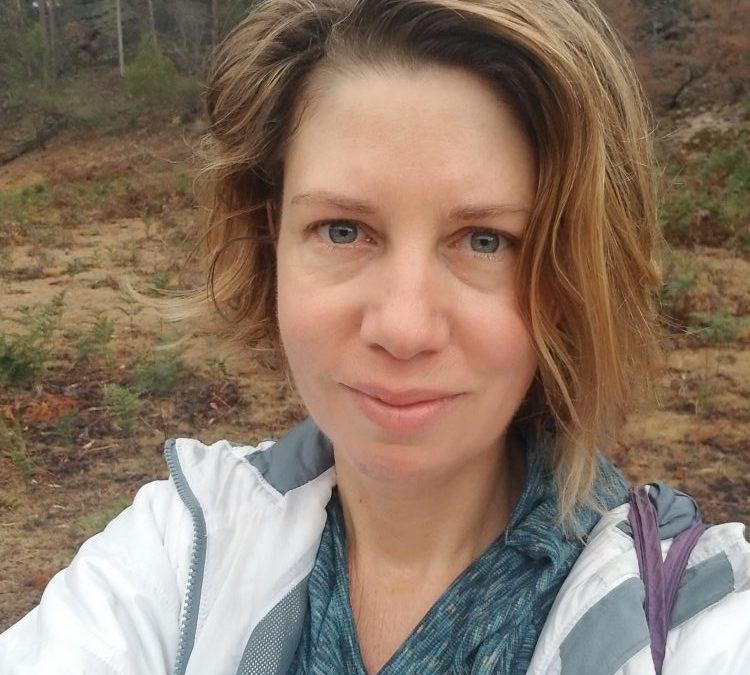 “Oh that must be so relaxing!” People respond to me when I tell them that I have just been on a meditation retreat for 3 weeks.

Pause, I look at them intensely and reply: “Nope, it was not relaxing, it was intense, but you could say it was refreshing.”

That photo at the top of this article shows me in the Australian bush after 2 weeks of silent meditation with a group. None of us spoke. We did about 8 hours of meditation a day, sitting still, eyes closed. We ate in silence, did everything in silence. And my experience was everything and nothing at the same time. But it definitely was not relaxing.

Meditation can be refreshing in my experience because it has this effect of pressing the reset button. All this stuff gets cleaned out of you, and then when you are done, you feel fresh and new.

If you are interested in attending a workshop, I am teaching a meditation weekend called Awakening the Third Eye at the Berkeley Spire (berkeleyspire.org) on February 8th and 9th 2020, on behalf of the Clairvision School of meditation. Register here.

But what is it? Meditation is a big word, it has many meanings to many different types of people.

The Oxford English Dictionary defines it as, “The practice of thinking deeply in silence, especially for religious reasons or in order to make your mind calm.”

The word meditation has been used in the written English language since the 1200s according to etymonline.com, and comes from Old French “meditacion” “thought, reflection, study,” and directly from Latin meditationen, “thinking over, meditation”.

It is a word used to refer to our efforts to turn towards our own consciousness and find silence, often for spiritual or religious reasons, or just for the purpose of seeking inner peace.

Despite that we live in this overly materialistic culture where everything is encouraging us to look outside, many people do want to turn inside, and some claim health benefits, both physical and psychological.

There have been many studies done on the power of meditation to help people since the 1970’s, some by people who run schools focusing on particular styles, and other studies more independent, showing consistent benefits for people.

Wikipedia says, “Since the 1950s hundreds of studies on meditation have been conducted, but many of the early studies were flawed and thus yielded unreliable results. Contemporary studies have attempted to address many of these flaws with the hope of guiding current research into a more fruitful path. In 2013, researchers at Johns Hopkins, publishing in the Journal of the American Medical Association, identified 47 studies that qualify as well-designed and therefore reliable. Based on these studies, they concluded that there is moderate evidence that meditation reduces anxiety, depression, and pain, but no evidence that meditation is more effective than active treatment (drugs, exercise, other behavioral therapies).”

For the purposes of this article, I will focus though on my own experience of meditating for 20 years, including weeks of retreats every year of up to 8 hours of meditation a day, and a morning meditation of 50 to 75 minutes every morning. I have also spent a good deal of time also teaching meditation to many students and clients, and seeing their gains, hearing their experiences.

The Art of Being

Meditation as the art of turning inside towards the source of one’s own Being has the experiential effect of creating an ever growing link to a sense of center that is not based on the personality or outer circumstances.

In the material world, many times we define someone by what they do, what they own, who they know, or outer circumstances. But what happens when they hit bottom as everyone does? You see if there is a stable sense of center, or self inside beyond the external trappings.

This click with one’s inner self, the Source of one’s Being creates a profound sense of well-being and Peace in the moment that it occurs. And it grows and blossoms and changes from there.

Many people who come to meditation have an inner knowing of this, they seek this click without quite being able to articulate it or understand it with the head.

Here we come to the limitation of the English language when defining consciousness, as the experience of Inner Being or even just the sense of being Centered in one’s self, is beyond ordinary “thought” or the words in your head. Even the silence in your head is not big enough to comprehend this type of stillness. It makes one feel big, full, empty, vast, knowing and unknowing all at the same time, and it changes so those qualities are not fixed or constant. The silence evolves and grows the more you open into it and embrace yourself there.

Some call this a Spiritual experience, I certainly do. Others might have similar levels of peace and depth connecting to their own presence beyond the words, but they might not use the term Spiritual at all. Just be with it as it is.

Essential Human Experience of Being

Whatever you want to call it, Being has a universality to it, beyond the religious or cultural connotations. It is an essentially human experience.

Connecting to a sense of Self or Center makes me feel right inside even when the external circumstances are completely out of kilter or disastrous. Being grounded in a way that is not dependent on anything or anyone external is really one of the greatest and most important achievements any human being can make. Why?

When you are grounded in yourself, in a way that nothing can shake you, there is fullness, and connectedness that brings clarity and lifts me up out of the fallen mess of the worldly nuerosis that most people live in. Whatever is going on, my awareness is turned inwards and sourcing itself rather than turned outwards.

Such a simple thing, the art of having my awareness turned inwards towards its source in a way that makes everything silent. Yet asking any group of people to do this for any period longer than 10 to 30 minutes, it soon becomes clear that most people suffer and cannot do it. The longer you leave them to sit, the more difficult it seems. Because thought cannot make it happen. It is not something we can force.

Turning to how and why do people get stuck when meditating, the issue of trying and forcing with the ordinary mind to meditate is probably one of the biggest obstacles, at least it has been for me.

In the ordinary world, when doing stuff, thinking and trying and even pushing to get things done, is rewarded, and it works pretty well most of the time. But when meditating, this same effort is really going to get in the way. I know this because believe me I definitely have tried a lot in many different iterations, and it just never works. The antidote to this is softening, and being more peripheral. The people who tend to effort a lot (many of us) tend to get very central in their focus. Meditation is not just about this central focus, but also the peripheral letting go, at the same time.

The next big and probably loudest thing that happens to many meditators, and definitely happened to me, is thoughts and emotions particularly those that are emotionally charged. They can go on, and on, and on and on…. Forever. And of course, emotions and thoughts are not silence and they are not meditation. The main reason that emotions and thoughts happen is because we have old wounds and traumas that continue to feed the mind.

“Samskara is one of the most important Sanskrit terms in Hindu philosophy. Yoga, the union with the Higher Self, is said to be achieved as soon as the last samskara has been worked out. Therefore, the primary objective of all yogas, or paths of self transformation, is to eradicate the samskaras of the mind. That is why it is so important for those who want to know themselves, or rather their Self, to have a clear vision of all the mechanisms of their samskaras,” Samuel Sagan, Regression, Past-Life Therapy for Here and Now Freedom. (p6.)

In my work with clients, I work with IST which is an interactive technique for meditators (and anyone who wants to rid themselves of samskaras) to know their Self and achieve spiritual transformation.

Lack of Will Power an Obstacle

One of the biggest obstacles that meditators face is that of lack of will power. This is really a sticky issue as in reality almost everyone has this problem. Human beings lack will power. That is one big reason why meditation in groups is much more powerful than meditation on your own. If you doubt that what I am saying is true, then give yourself the challenge to sit for a whole day – 6 hours of sitting still with your eyes closed, and do not think. Just be in your Self. After you have finished that day, I bet that you will have a very good idea what I mean when I say we struggle with will power.

The will to sit in silence is much like a muscle of consciousness. A muscle is an analogy here, but it works if you look at how it is when people first learn to do exams. At first studying and taking exams seems very hard, and requires a lot of effort. But if you are doing this all of the time, at one point it gets easier. Your muscle is stronger, you can do it better, with more ease.

The muscle of learning to be in silence and fullness grows with time and effort. Keep repeating the steps of coming back to the technique that you are practicing, dropping the thoughts and emotions, finding the fullness in the silence. The ability to stay in the silence and follow it’s momentum inwards develops with practice.

Please though, do not be under the illusion that this practice will be relaxing. There are many other adjectives you might use, but relaxing is not one of them!